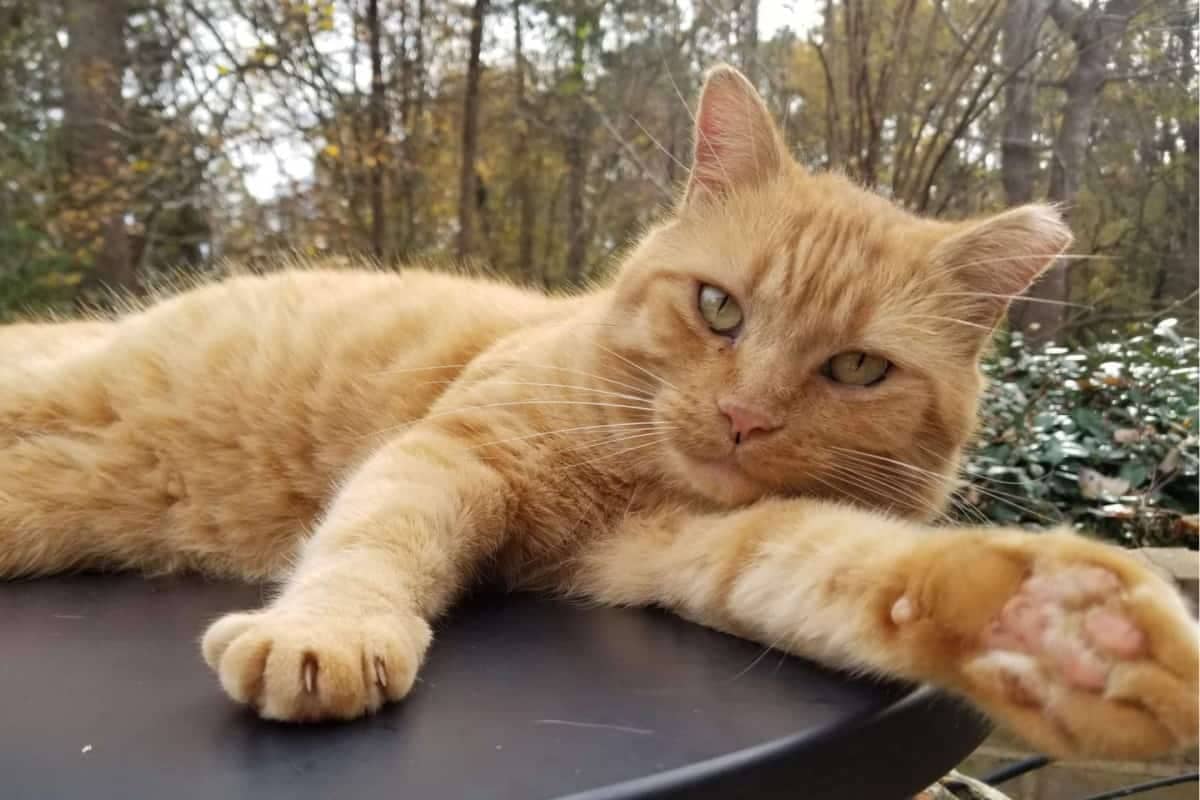 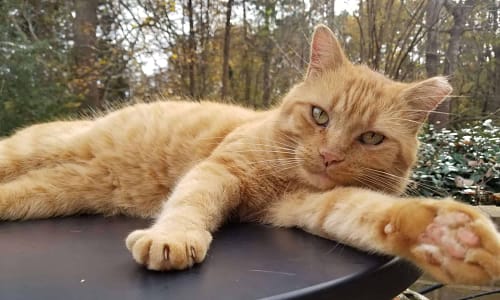 Bio: Daddy Cat was an infamous and prolific neighborhood kitten maker when I purchased the property in late 2015. He resisted being trapped by at least two experienced trappers over the years. He would prance and strut through the backyard at the edge of the woods. Sometimes he’d sit on the patio table, staring at me through the window. It broke my heart.

Once in a while, he’d stick around long enough for me to put out some wet food and water, always remaining a few feet away. My neighbors were feeding him, as well as a man named Junior, who lives somewhere through the woods at a house I can’t see from the road.

On a particularly rainy and cold evening in the Spring of 2019, he FINALLY let me pet him while he was eating. It was Fancy Feast Flaked Fish & Shrimp (what I affectionately call “cat crack”) that finally won him over. After cleaning his plate, he flopped upside down and gave me his belly to rub. He wrapped his front paws around my forearm and licked my hand — something he still does when he’s in the mood. He spent the first few nights in the master bathroom sleeping soundly on a plush blanket.  He sleeps like the dead. I made a neuter appointment for a few days later and had him ear-tipped, just in case, he ended up being a TNR cat. Thankfully, he decided to keep me.

He always comes inside on rainy days and cold nights. He’s a bit of a prima donna in terms of the rain. He sleeps on my head or under the covers when it’s cold. He HATES the litterbox but will use it for, ahem, number two. I have yet to get a good photo of just how he balances on the edge of the corner, so he doesn’t actually have to step IN it. He goes to the back door when he has to pee, meowing insistently. The two times I have ignored him, I have paid for it with pee in the corner. My fault. Otherwise, he sleeps on the patio or follows me around when I am taking care of the rest of the sanctuary cats. See the plethora of patio photos.

His girlfriend (sister? relative?), Momma Cat, is an orange-white polydactyl. She doesn’t live at the sanctuary but is cared for by our neighbors – she’s now spayed! I’ve included her bio as well. Once in a while,  he goes to visit her through the backyard – as long as the husband is not outside – if I am late giving him breakfast.

On warm days, I sit in the white chair, a mug of coffee in hand, listening to the sounds of morning, with him purring contentedly in my lap. Sometimes we meditate together. He’s the purrfect mascot, no? Neighborhood tough guy who’s a mushball after all.